Before attempting to DIY this repair, please read this entire blog.  CARspec gets phone calls about DIYers struggling with this repair often and this blog was written to address the most frequently asked questions.

2004-2009 Toyota Prius vehicles can be prone to a growling or grinding noise from the front wheels, a noise that gets louder with speed or worse when turning.  The most likely cause outside of a brake concern (meaning brakes that are worn to the point of abnormal noise like metal on metal contact) is excessive wear of the front wheel bearings.  As the second generation (2004-2009) Prius has aged, this issue has become more common.

Inspecting for the issue is straightforward: while both front wheels are unloaded (i.e. off the ground safely) the front wheel is rotated by a technician while another listens with a mechanic’s stethoscope.  A failed bearing will have a noticeable growling or grinding noise from the knuckle or bearing housing when inspected this way.  The bearing may also have free play in extreme circumstances – you may be able to wiggle the wheel top to bottom or side to side. 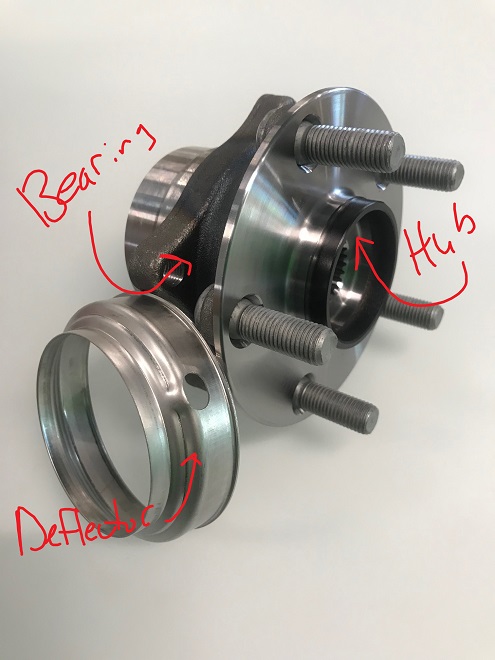 The bearing is sold preinstalled to its housing, with a hub pressed in as well.  Also picture above is the axle tone wheel’s deflector.  This protects the axle’s high and low ridges of the tone wheel (used for the ABS’s wheel speed sensor to detect rotation of the axle).  This deflector is pressed into the hub and bearing assembly from the back and must be removed to install a new hub and bearing assembly.  We strongly encourage anyone attempting this repair to get a new deflector, as the old one is typically bent beyond repair upon removal.  The deflector must be reinstalled to protect the axle’s tone wheel from road debris.

While the hub and bearing assembly appears an easy repair, often the bearing housing is seized into the front knuckle.  Here are some precautions to take and inspections to undergo before starting this repair:

CARspec stocks all the Toyota Genuine parts to perform this repair.  If you have a growling or grinding noise from your 2004-2009 Prius, don’t hesitate to set up an appointment to have it inspected by calling us at (952)426-4798 today!