Beginning in the 2006 model year, Lexus introduced the GR series of engine to the IS250, IS350, GS300 and GS350, some available with all wheel drive (AWD) initially and others adding the option later.  With the introduction of AWD to these models came a not uncommon issue – a leak from the inner front differential seal.

The most straightforward access to the inner, engine side seal is to remove the drivetrain and pull the differential off of the engine.  The axle shaft coming through the oil pan is then visible.  Note in the below photo the driver’s side exhaust manifold and mount is removed to gain access as well, and the engine is hanging from a mobile hoist.  The leak location is noted with an arrow: 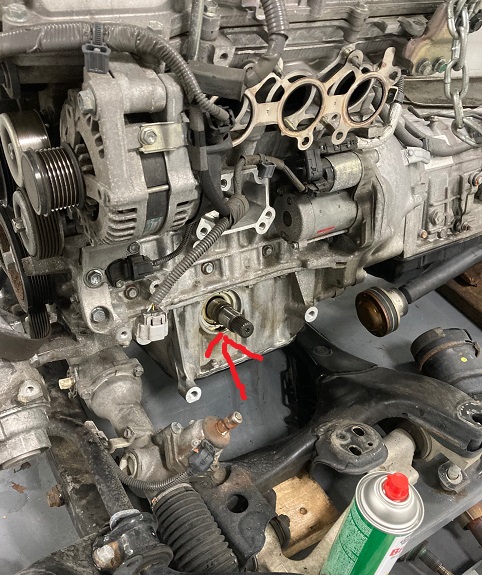 Engine out, differential off

And the differential removed to replace both axle seals and breather: 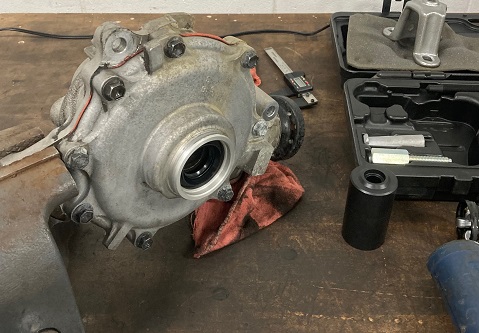 The seals are the same on both sides and should both be replaced.  We strongly recommend replacing the breather as well to prevent reoccurring leaks if the breather becomes clogged (like on the Rav4).

It is also possible to remove the front differential with the engine/drivetrain still in the vehicle, however this requires hanging the engine from the engine bay and removing the subframe, followed by carefully lowering the engine partially out of the bottom of the bay to gain access to the differential.

Its easier (and paradoxically faster) to set the entire drivetrain on a table and lift the chassis off than maneuver the differential out on its own.

As Minneapolis, Minnesota’s premier independent Toyota and Lexus specialist, CARspec technicians can usually complete this repair in two business days and provide no cost inspections for the concerns.