CARspec had the opportunity to diagnose and repair a 2007 4Runner recently that wouldn’t engage 4WD high or low – the shift indicator would only blink and the car remained rear-wheel/2WD.  Here are our notes on the diagnostics and the repair:

Toyota provides little documentation and diagnostic help when it comes to their temporary 4WD systems.  The 4WD module has no self-diagnostics and the repair manual is little help in the way of diagnosing transfer case actuator/front differential automatic disconnecting systems.  The wiring diagrams for the systems also don’t indicate when the monitoring switches (which track the internal location of the actuators) should be open or closed.  Getting a good diagnosis on a failed actuator, either at the transfer or the front differential, is difficult. 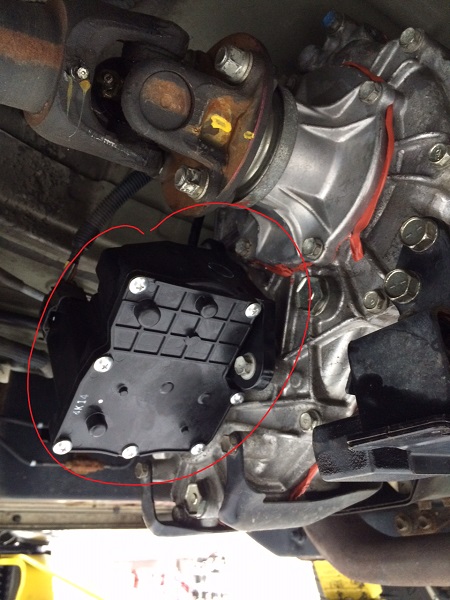 Replacing the actuator, which houses both control motors and all the switches, is a complicated procedure if you’ve never tackled it before.  It requires transfer case removal and partial disassembly.  Here’s what it looks like opened up, actuator still installed: 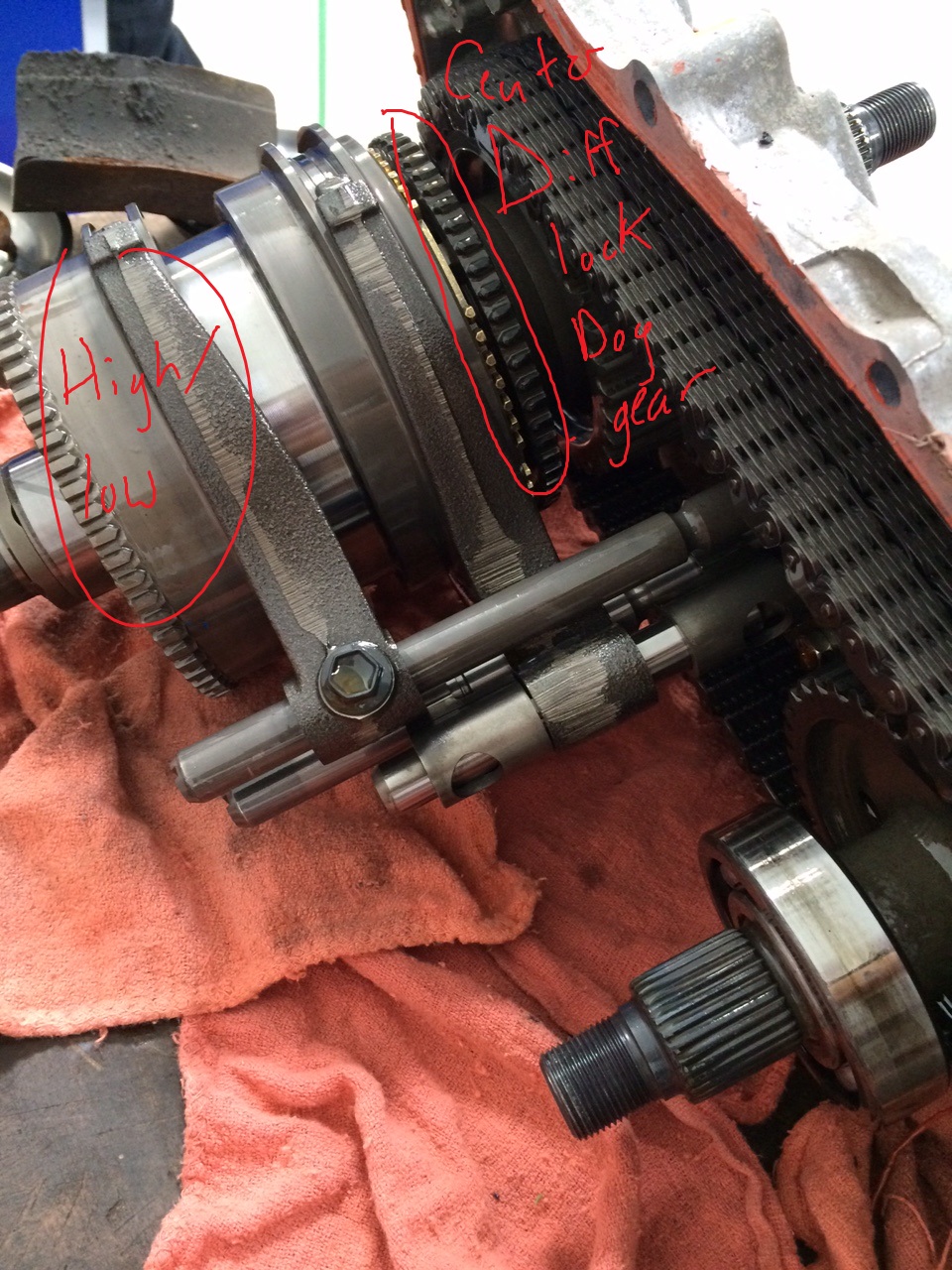 The above is the transfer case open with the rear gear cluster installed.  Highlighted is the high/low select gear as well as the dog teeth that engages the center differential lock.  The above is pictured after the new actuator was installed in the 4WD high position (the actuator itself includes the rods that are attached to each select fork pictured).  A sharp eyed technician will also note that the actuator shaft clips aren’t installed – they were after the photo was taken (there are three total on this transfer). 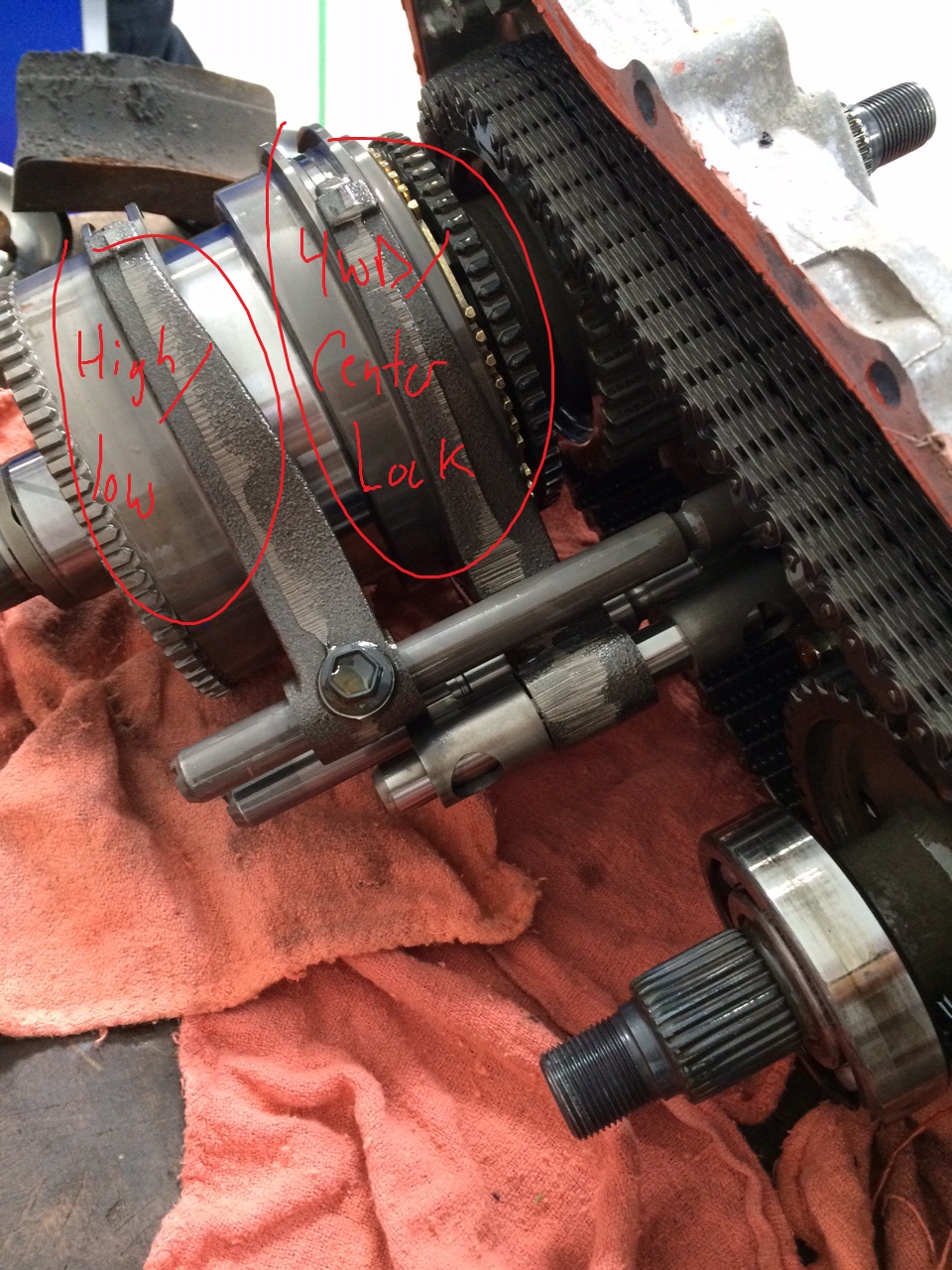 The leftmost gear sleeve in the above photo moves to the left when actuated to engage low gear, rightward to engage high hear.  The rightmost sleeve in the photo moves one step right to engine 4WD, and another step to the right to engage the center differential lock (two steps back left puts the vehicle back into 2WD).  The above is currently in 4WD high.  Here’s a closeup of the lockout shaft that prevents gear clash as well: 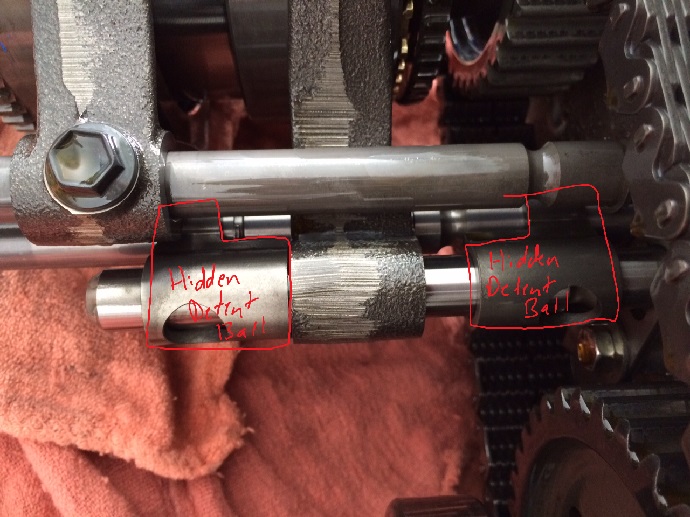 Noted are the hidden detent balls that engine the lockout shaft.  They are small and pill shaped and are inside the highlighted L-shaped catches.

After the new actuator was installed and the FIPG gasket was allowed to sit overnight, the transfer case was filled with gear lube and returned to service, now with functioning 4WD High/Low and center differential lock.

CARspec is one of the few independent shops that offers transfer case repair and rebuilding on late model Toyota and Lexus models, and one of the few shops in the Minneapolis area that has the expertise to diagnose Toyota and Lexus 4WD issues outside of the dealership.  As Minnesota’s independent Toyota, Lexus and Scion repair specialist we pride ourselves both our fast turnaround, expertise and quality that is unmatched in the industry.