Late model Tundra, Tacoma, FJ Cruiser and 4Runners equipped with part-time 4WD are, especially at higher mileage, more susceptible to 4WD failure than their older brethren.  In a similar vein as the 4Runner we repaired recently that had a failed transfer case actuator, CARspec was tasked with a Toyota Tundra that wouldn’t complete the engagement of 4WD from 2WD – the select button would only blink.  The technician noted while the vehicle would engage 4WD high (as in all 4 tires were powered), the system wouldn’t complete it’s operation and prohibited a 4WD low selection (it didn’t think it was in 4WD proper)

After checking the transfer case actuator and switches for functionality, the technician noted the final completion switch inside the front Automatic Disconnecting Differential (A.D.D.) had excessive electrical resistance when it was normally supposed to be resistance free (when the switch was closed it registered too much resistance).

The A.D.D. system on late model Toyota trucks and SUVS is used to disconnect the front axles from the differential.  This increases fuel economy because the front drive shaft and axles aren’t subjected to the same rotational drag they would be if they were still connected.  A small electric motor inside the front differential engages a splined collar that links everything up inside the front differential.  Inside this failed A.D.D. unit the final switch that indicated a complete engagement had failed.  The 4WD module, not knowing if the A.D.D. was done working, kept waiting for a switch signal that would never come. 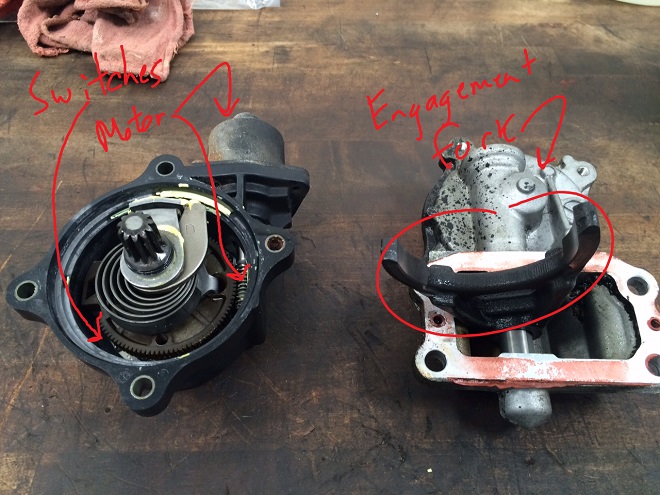 The repair for this was straightforward – replace the A.D.D.  It’s important you properly reseal the differential with FIPG (the orange in the above photo, similar to this post about a leaking cooling system due to poor FIPG use), but otherwise the repair is a simple job with hand tools and some maneuvering.

As Minneapolis’s independent Toyota and Lexus repair specialist, we are able to diagnose and repair the above in only a few hours, at considerable cost savings vs. the dealership while offering the same technical prowess you’d expect from former factory-trained mechanics.  If you are having 4WD issues with your Toyota or Lexus, don’t hesitate to call us at (952)426-4798 to make an appointment today!