Toyota and Lexus jump start backwards – what to do now

Toyota and Lexus jump start backwards – what to do now

So you jump started your Toyota or Lexus backwards.  Oops.  Don’t panic.

Here are the best first steps to take to address starting your car.  You’ll need a flashlight and some patience:

Step 1: Figure out how you just jumped it backwards so you don’t do it again.

Step 1 is damage control.  You may have gotten lucky and not fried anything, but you probably won’t get lucky twice.  Make sure you connected the battery correctly – positive to positive, negative to negative.  Some Lexus models have reversed battery poles that can fool even the most experienced technicians.  Look for a + on the battery indicating a the positive teriminal,  – for negative.  You can’t always rely on the color of the terminals, but red is usually positive (+)

Step 2: Try it again once you’ve verified everything is hooked up correctly

If you’ve fried something hooking the battery up backwards, trying it correctly is unlikely to hurt anything further.  Hook up the dead vehicle to the jump pack or running vehicle and try it again.  If you got lucky, it’ll start.  Congrats!  If it sparks, won’t start, won’t crank, or won’t anything, read on.

Toyota and Lexus power distribution systems (ie. the fuses that run everything) are usually located close to the battery and are high amperage.  On later model vehicle they are all packaged into one large fuse bar that flows power from the battery and alternator to the vehicle.  When you jump a car backwards, you are giving current a straight shot through the alternator and the first thing to go is the alternator fuse (usually labeled ALT or MAIN on the main fuse bar).  The cover for the main fuse bar will have a diagram of what fuses are where.  Here’s one from an IS250: 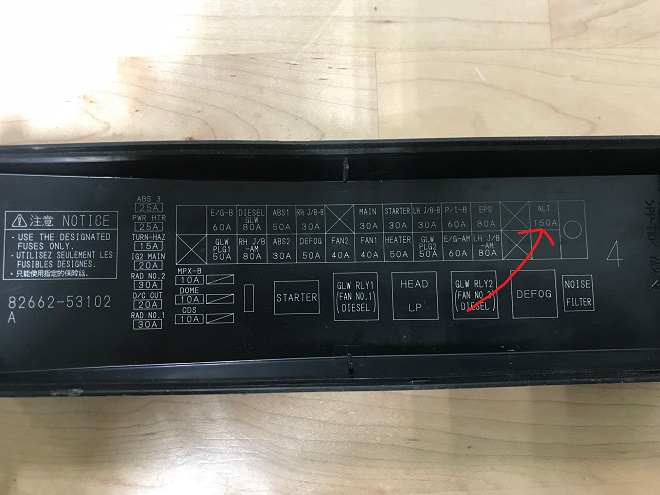 If you’ve blown something in the fuse bar it’ll be a small break in the sheet that makes up the fuses, often through a plastic cover like this: 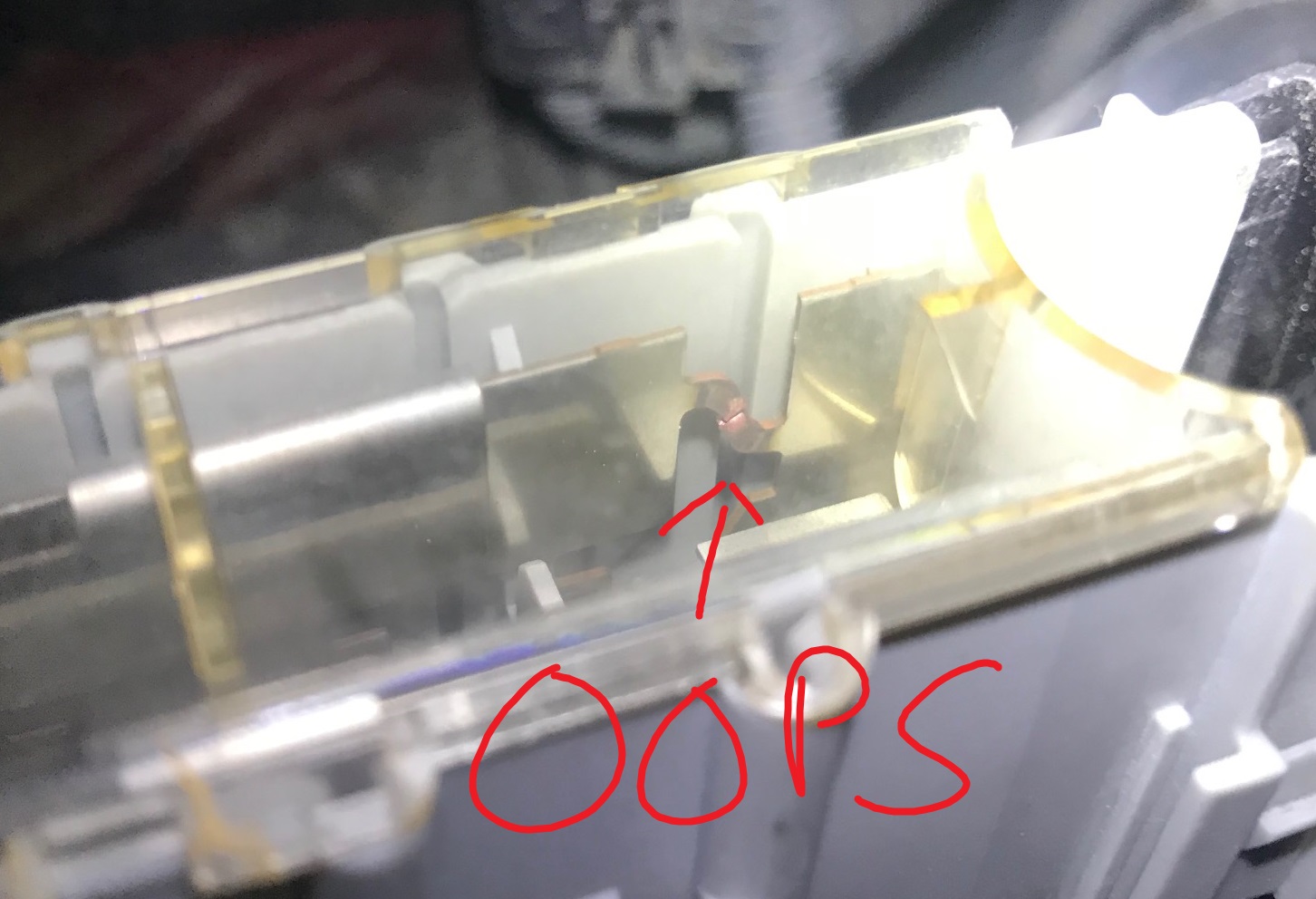 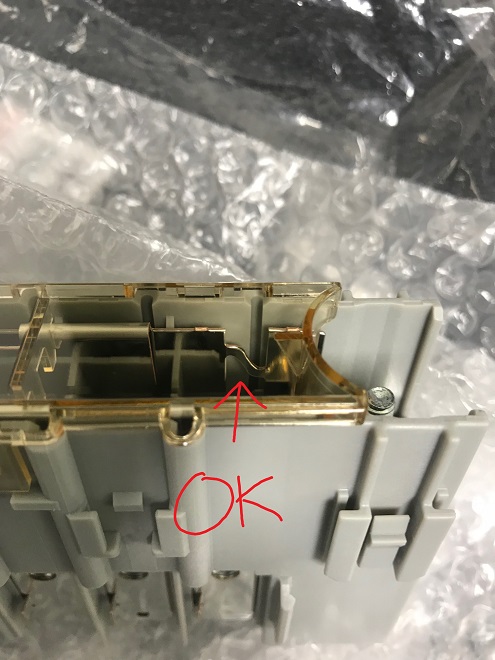 IS250 not blown fuse 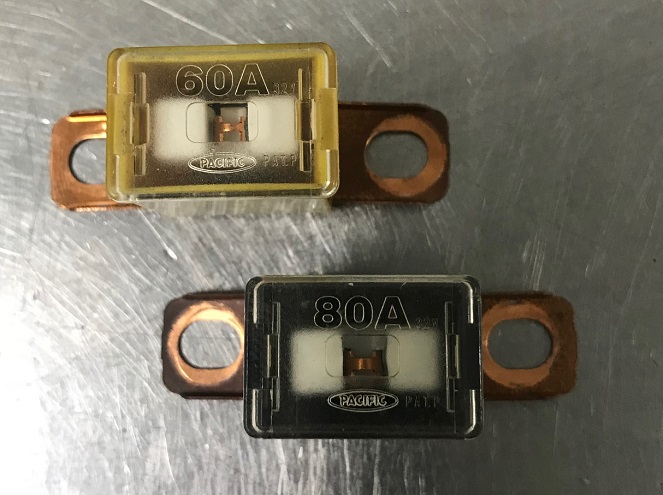 Note that older fuses are bolted into place and cannot be pulled out.

Large main fuses as part of the fuse bar (first picture) cannot be replaced on the side of the road.  Other, smaller blade type fuses that are blown are easily removed with the provided tool (stored in the underside cover or in the fuse box in the bay, it is a white tweezer tool) and can be replaced with the spares in the fuse panel.  If you replace all the blown fuses you found and it starts, congrats!  If not, or if a main fuse or alternator fuse is blown, read on.

Step 4: If a main fuse is blown, or the vehicle won’t start even though the fuses seem OK, have the vehicle towed to a trusted mechanic

The unfortunate truth about jumping a late-model Toyota or Lexus backwards is that usually the alternator fuse has blown, and the alternator fuse is not serviceable by most owners.  The above IS250 main fuse bar required removal of the battery, AWD control module, and disassembly of the fuse and relay block to gain access to the 10-odd securing bolts that route power to and from the fuse.  You will save yourself time and money by having a Toyota or Lexus specialist tackling this issue for you.

While we hope you got lucky and the car started after swapping the battery polarity or replacing some small fuses, most peope don’t.  If you jumped your Toyota or Lexus backwards, don’t hesitate to give us a ring at (952)426-2798 to set up a no-start diagnostic appointment today!  CARspec normally can repair a no-start or blown main fuse bar within the same business day.

By John Cleveland|January 3rd, 2019|Battery|Comments Off on Toyota and Lexus jump start backwards – what to do now