CARspec had the chance to diagnose a 2005 Toyota Highlander with the battery light on.  The owner had previously taken the vehicle to a local dealership that had installed a new starting battery to no avail.  Before the owner returned to the dealership to have the alternator replaced, she came to CARspec for a second opinion.

In Toyota and Lexus vehicles, the battery light illuminates when there is abnormally low voltage from the vehicle’s charging system.  A healthy Toyota alternator outputs between 13.5-14 volts while driving.  When the voltage falls below 12.5 down to 11.5 volts the battery light illuminates to alert the owner to a low charge condition…or so the vehicle thinks.  There are two reasons the light can come on – low voltage in the system OR the circuit that checks the charging voltage has failed.  This 2005 Toyota Highlander had the latter.

Upon arrival, CARspec’s technician checked the alternator’s output – it was a healthy 13.9 volts with the fans, lights and radio on.  Clearly the cause of the battery light wasn’t low output but rather the vehicle incorrectly sensing low output.

The owner OK’d diagnostic time to find the root cause of the problem.  After a few checks, the technician noted a power supply line to the alternator was dead – the internal sensing circuit that sends the readout voltage to the ECM (which then checks for the proper voltage, and illuminates the battery light as needed) had no power supply.  Tracing the wire back to the battery, the technician noted corrosion on a connector: 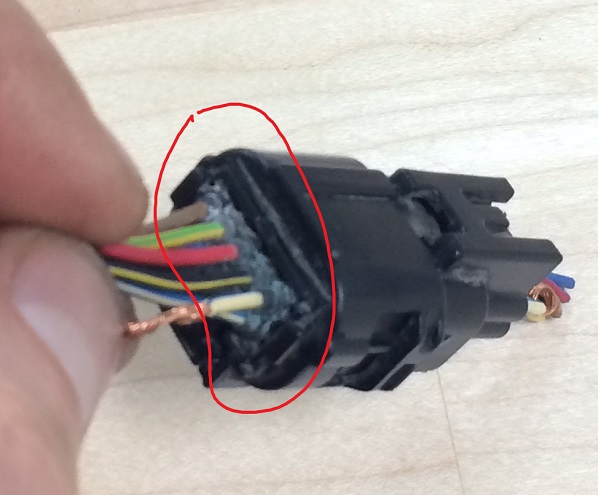 The green indicates the terminals were heavily corroded and the connector’s seal had failed.  Note that this photo is after the repair was made (we didn’t cut the connector without permission!).  Checking the resistance of the power supply wire across the connector uncovered why the alternator had no power: 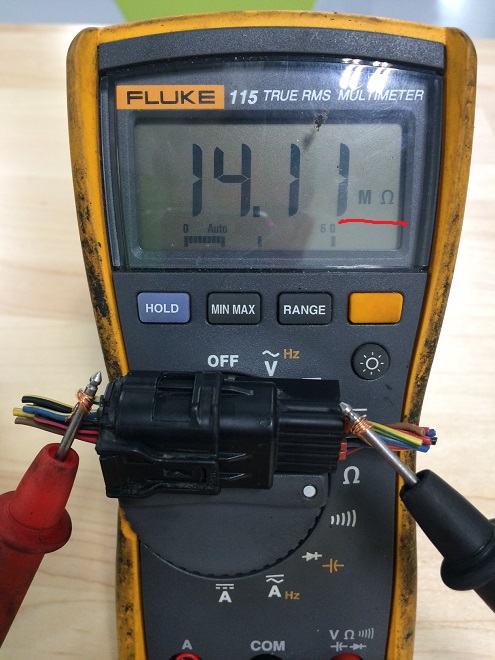 You normally see .1-.2 ohms over a connector.  This connector had 14,110,000 ohms because of the corrosion. The technician couldn’t disassemble the connector it was so seized together.  There is where all the voltage was going.

The connector was a 9 terminal affair, meaning 18 terminals were cut and soldered and installed into new connectors.  While a lot of labor, it is significantly cheaper than replacing the entire engine harness.  The harness was repaired and the vehicle returned to service, the battery light now off without needing an alternator.

As Minneapolis, Minnesota’s premier independent Toyota, Lexus and Scion repair shop we pride ourselves on arriving at the correct conclusion the first time.  If you’ve got a light on your dash, give us a ring at (952)426-4798 to make an appointment today!

FOR SALE: 2011 Prius. . Howdy CARSpec crew! We’re downsizing the fleet a bit to make way for a newer loaner next year. For sale is our 2011 Prius, 71k miles, in white on tan. The vehicle was purchased new in 2012… instagram.com/p/CESD…