CARspec had the opportunity to diagnose and repair a unique concern recently.  A 2002 Camry was occasionally running out of transmission fluid.  The emphasis is on “occasionally”, as the owner had driven the vehicle from Minnesota to Florida without issue, while more recently was unable to go even 10 miles after a transmission fluid fill up of 4 quarts.  The fluid would disappear with no rhyme or reason.

Upon arrival at CARspec, the technician filled the fluid to the proper level – it needed roughly 4 quarts of fluid.  The technician then drove the vehicle for 30 miles without issue at both high and low speeds, trying to duplicate the concern.

After a conversation with the owner, not much made sense as to where the fluid was going.  The transmission cooler was intact (there was no mixing of coolant or transmission fluid, which would indicate a failed cooler internal to the radiator), nor any huge external leaks that would cause rapid loss of fluid like the owner experienced.  The technician noted that the left front axle was new (the owner had just had it replaced before his Florida trip) and that side’s axle seal was leaking slightky, leaving a residue on the subframe and underbody of the vehicle.

As a repair attempt the technician was given the OK to replace the leaking seal.  Lo and behold, the axle was the cause of the intermittent leak: 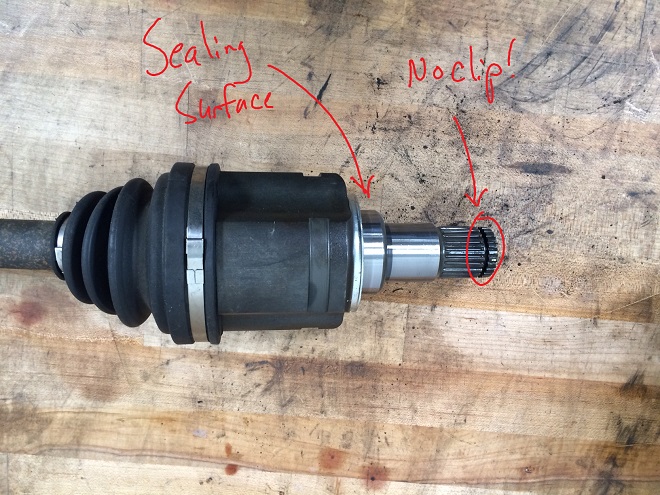 The axle’s retaining clip that secures it into the differential was missing (and was likely never there from the beginning).  This allowed, when the owner hit a big bump, the axle to pull out of the transmission just enough for the seal to slip off of the sealing surface and rapidly pump out all the transmission fluid in the pan.

A new securing clip and axle seal later (it was damaged from the excessive axle movement), the vehicle was returned to service, now with the axle securely clipped into the differential.

This was an odd diagnostic and repair – a previous mechanic’s error or aftermarket axle missing the proper clip led to a huge headache for the owner.  Here at CARspec we pride ourselves on our quality of work and only use Toyota Genuine parts, and are glad we could sort out this odd issue for the owner and get him back on the road.

If you have an odd fluid leak, don’t hesitate to call Minnesota’s premier independent Toyota, Lexus and Scion repair specialists at (952)426-4798 today!