We’ve written about coolant leaks before, from the likes of a water pump, head gasket, or radiator, and today’s repair was much along the same lines.  This 2008 Toyota Tundra had just over 180,000 miles and the water pump was both making a growling noise and leaking coolant heavily.  Here’s the pump removed from the truck: 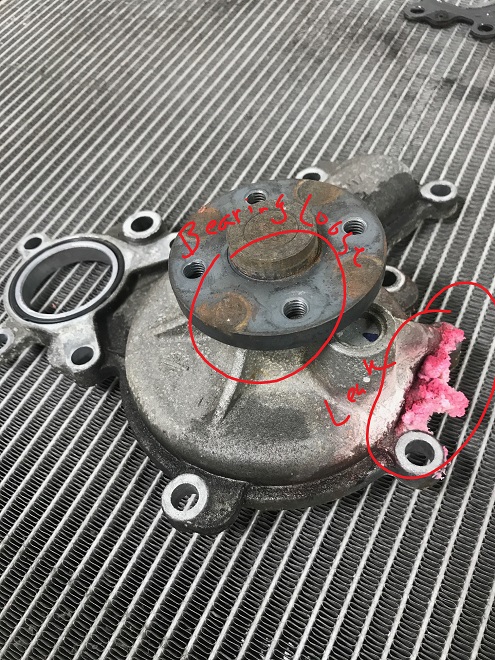 The most common failure seen across all Toyota and Lexus models 2007 and later is an internal bearing failure with a coolant leak, the most common symptoms of a failing bearing be freeplay or a growling noise when the engine is idling.  More often than not the relief port (sometime referred to as the weep hole) allows the leaking coolant to be directed out of the bearing and down the side of the engine.  The pink coolant above is from the relief port and was leaking heavily.

If you suspect you’ve got a failure water pump, with either a growling noise while the engine idles or coolant leak, don’t hesitate to give us a call at (952)426-4798 for an inspection today!  As Minnesota’s premier independent Toyota and Lexus specialist we stock the majority of Toyota Genuine water pumps and can repair most failures within 24 hours.