The introduction of the 2GR-FE V6 into the Toyota and Lexus linueup, first in the 2005 Avalon and later in the 2007+ ES350, RX350, Camry and Highlander, was plagued with oil leaks from the engine’s timing cover. Largely resolved by the 2010 model year, the number of 2007-2009 Toyota and Lexus models sold with the 2GR-FE V6 mean that many Toyota and Lexus owners are in need of this repair. CARspec wanted to share a bit more about the problem and repair because of the expense and complexity of the job. 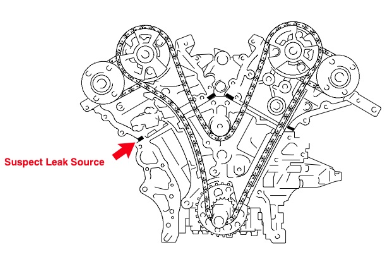 While the cause of the leak is up for debate, the source of the leak is always the same: where the timing chain’s cover meets the block meets the cylinder head (as seen above). The timing cover is sealed using Toyota’s fix in place gasket, FIPG, and 1282b sealant lining the edge of the cover where it meets the block and cylinder head. This flexible gasket is similar to the silicone liquid gasket you’d use to seal a bath tub or window but is designed to withstand the heat and vibration of a modern engine. The original FIPG fails, leaving the owner with a mess on their hands and an oil-covered serpentine belt.

The procedure to reseal the timing cover is time consuming, requiring the entire drive train be dropped out of the car onto a table, cleared of all auxiliary system, totally torn down, cleaned, reglued and reinstalled back into the vehicle. The rebuild uses three entire tubes of FIPG to reseal everything during reassembly. CARspec cleans the entire block’s sealing surface and timing cover of all old FIPG and oil residue, taking special care to reapply extra FIPG where the leak may try to redevelop.

CARspec offers timing cover resealing at competitive rates, including all new gaskets, FIPG, 1282b, coolant, and post-repair alignment. RX350, Sienna, and Highlander reseals run slightly more due to added AWD fluids, seals, and a small increase in labor. As Eden Prairie and Chanhassen’s Toyota and Lexus specialist we’re happy to offer this procedure that most auto mechanics would send to the dealership, now at a lower price point!