The first cold start of the morning some Toyota and Lexus V6 owners, especially those who have the 2.5L or 3.5L V6, notice a loud rattle the first few seconds after startup.  The noise disappears after the car builds oil pressure.  The most common cause is the variable valve timing camshaft gear assembly leaking down oil pressure as it sits.  What is this part and what should you do if you experience these symptoms?

The variable valve timing system allows the engine to benefit from timing that can change as the engine dictates – it’s like having many different styles of camshaft at the ready.  At a steady freeway cruising speed?  The variable valve timing acts like an exhaust gas recirculation system, helping to reduce engine emissions.  Going for a spirited drive?  The timing ramps itself up, aggressively advancing the intake cam to help speed air and fuel into the cylinders to give you the most powerful combustion it can muster.  Both intake and both exhaust camshafts are independently controlled by individual valves that flow oil into and out of the camshaft gears, advancing and retarding the camshaft’s timing as dictated by the engine’s computer.  Oil pressure is used to move internal phasers in the cam gears, allowing them infinite variations of position.  Below is a photo of a variable camshaft gear opened up: 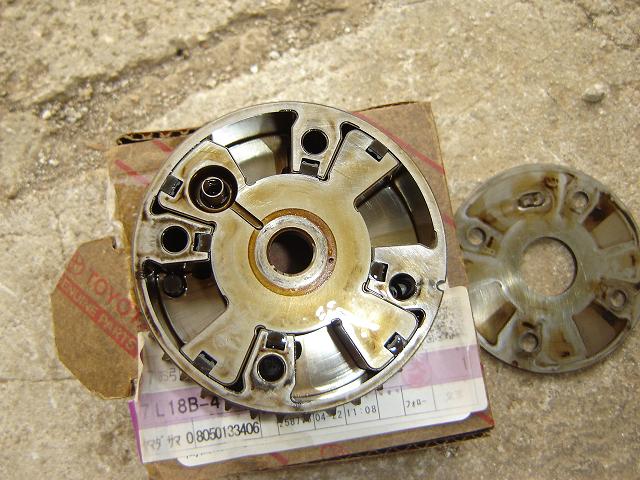 The problem lay in the construction of the intake cam gear assemblies – in some cases while they sit unused (engine off) they bleed oil pressure back into the engine.  This is not a big deal when they sit idle, but upon startup they are starved of oil (it all leaked out back into the oil pan!) until the oil pump can send them pressurized oil to take up the slack.  This the rattle noise you hear – the internal phasers being knocked about without much oil to cushion them.

The problem led to enough failures that Lexus’s repair bulletin was upgraded into a full blown recall for some 3.5L direct injection engine (recall DLG).  For reasons unknown these gears were more likely to fall apart and throw debris.  Other versions of the engine with these cam gear can also have issues with check engine lights and ticking noises from the engine while it runs.  Toyota repair bulletin T-SB-0094-09 covers this more in depth (it’s a big procedure requiring engine removal).

If you experience this noise from your engine, CARspec is happy to confirm the condition at no charge.  As a Toyota and Lexus specialist we see these engine more often then most auto shops and can get the condition repaired quickly, or if applicable direct you to the local dealership for recall work or warranty repair.