CARspec recommends Toyota, Lexus and Scion original equipment manufacturer (OEM) parts for every maintenance or repair we perform. It can be a challenge to explain exactly why they are a higher quality part than there aftermarket/parts store counterpart to a cost conscious guest, but we recommend OEM parts exclusively. No one wants to spend more than they should on their car (us included), so we thought we would share one specific instance where Toyota OEM parts fit the bill.

The example in question involves a 2007 Lexus ES350 with a squeak noise out of the engine. After replacing the serpentine belt, the noise presented itself intermittently to the owner. Upon diagnosis, the noise was found to be coming from the No. 2 belt idler pulley, a pulley that helps guide the serpentine belt around the engine. This is a common source of abnormal noise from the engine, and there is a service bulletin from Toyota/Lexus for the issue.

Here’s a photo of the pulleys, the culprit of the noise on the left: 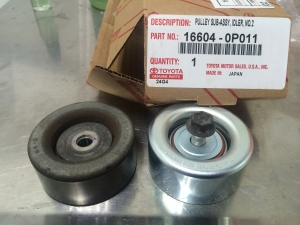 You can see the polish on the washer (the blue/purple shine): 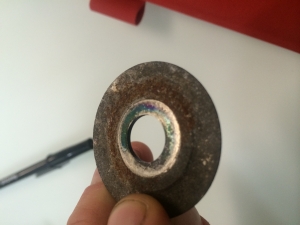 The center section of the bearing rubs on the washer that secures against the bolt, resulting in a rubbing noise.

Note the part number on the box behind the new pulley vs. that of the old part number on the linked bulletin – Toyota updated the part to make it less likely to happen again.  Toyota is constantly revising components as they see them fail in an effort to prevent future failures, even when they don’t have to.  For reasons like this and the general quality and workmanship we here at CARspec see on OEM parts, we will always recommend Toyota, Lexus and Scion factory replacement parts.