One of the most common failures, across all Toyota and Lexus models, starts with a concern over a growling, grinding or rubbing noise out of the engine when the engine is running.  The cause is almost always the water pump pulley bearing failing, digging into the bearing race, and allowing coolant to leak out of both the bearing shaft hole (now worn wider due to the failure) and the weep hole.

We discussed the replacement criteria for water pumps in a previous post, noting that a small amount of coolant buildup is normal and only requires monitoring.  The failure we’re discussing here is of the catastrophic variety, that which will destroy the entire engine if not remedied.  Here’s a water pump failure we had recently, the pump leaking coolant so quickly it left a trail into the shop, the bearing so damaged the pulley (not pictured) was contacting the pump body (it’s not supposed to do that). 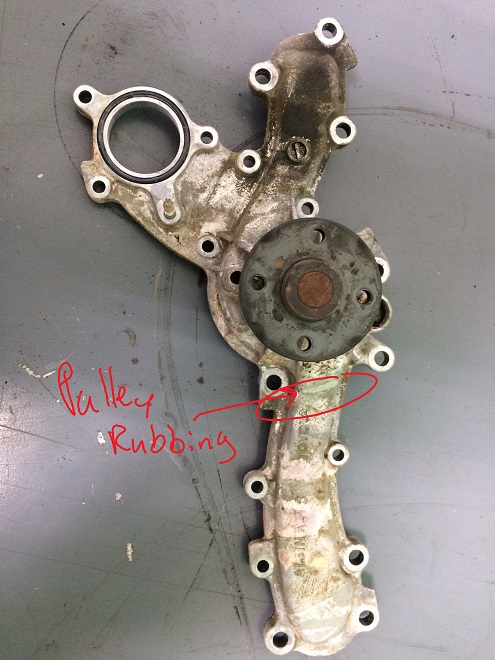 The first large batch of water pump failures started with the introduction of the 2UZ/1GR/2GR/3GR/4GR/1NR series of engines across both Toyota and Lexus in conjunction the first applications of Toyota’s Super Long Life (Pink) Coolant.  These early pumps have now been redesigned to help prevent a failure reoccuring.  As such, CARspec highly recommends a DIYer buy a Toyota/Lexus Genuine water pump to replace their failed unit – aftermarket options from Denso, ACDelco, and others aren’t likely to have the updated seal and bearing design.

As Minnesota’s premier independent Toyota and Lexus repair shop, we see water pump failures regularly and stock the majority of Toyota and Lexus water pumps for a quick turnaround.  If you’ve got a grinding noise or coolant leak and are in the Minneapolis metro area, don’t hesitate to call us to set up and appointment today!