The 2006 GS300, 2006-2012 IS250 and 2007-2012 GS350 are all prone to either a check engine light and/or a loud exhaust caused by a pinhole exhaust leak.  The design of the exhaust is such that the heat shields around the center section of the y-pipe hold moisture and road salt to the pipe, accelerating corrosion.  More on the check engine light in a moment.  Here’s a wider view of the issue, the pipe off of the vehicle: 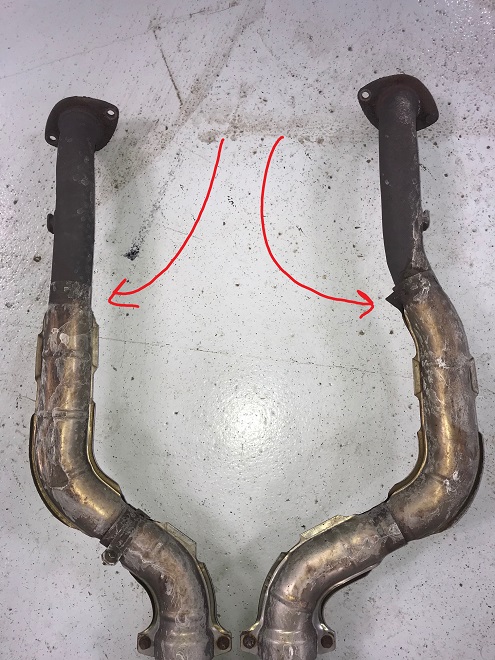 And zoomed in more on the passenger side of the pipe (the right side in the above): 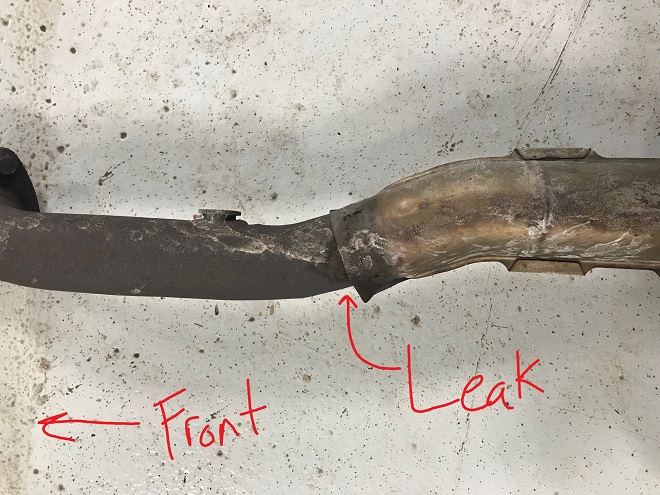 And a closeup of the leak location and corrosion (the heat shield has been bent back to better show the amount of corrosion): 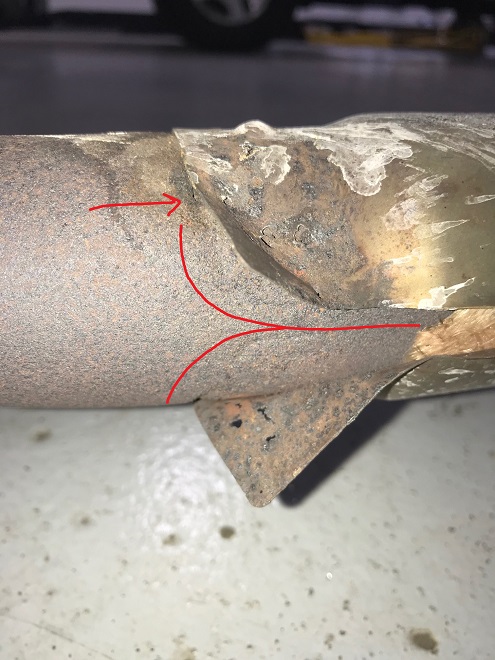 The leak in the above photo is indicated by the arrow, the other lines to indicate how the pipe has corroded underneath the heat shield.

The GS350, IS250 and GS300 all share the same design of this pipe, names a large y-pipe assembly that collects both the passenger and driver’s side exhaust into one pipe before being routed to the mufflers.

By comparing the data from the “upstream” (Sensor 1) and “downstream” (Sensor 2), the vehicle can gauge how well the catalytic converter is functioning.  The engine is constantly changing and correcting how much fuel is injected into the cylinders on each bank depending on the data from both air/fuel ratio sensors (“upstream” or Sensor 1, one on each bank of the engine).  The vehicle then compares this data to the other oxygen sensor on the same bank, ie. compares Sensor 1 “upstream” to Sensor 2 “downstream”.

If the catalytic converter is functioning properly, the data from Sensor 2 “downstream” should remain relatively constant compared to Sensor 1 “upstream”.  This indicates the catalytic converter is catalyzing the exhaust mixture of oxygen, H2O (water), Carbon Dioxide, Carbon Monoxide, Nitrous Oxides (smog), and hydrocarbons (unburned fuel) into the cleanest emissions possible (mostly Carbon Dioxide and Water).  It is important to note that only oxygen content of the exhaust is being checked by both sensors, but this alone is enough to confirm the health of the catalyst.  The data from Sensor 2 “downstream” should appear as if the catalyst is a buffer to the rapid data changes of Sensor 1 “upstream”, meaning the Sensor 2 “downstream” data should only change slowly and not bounce back and forth.  It should appear to doing it’s own lazy job.

HOWEVER, if there is an exhaust leak near Sensor 2 “downstream”, oxygen can enter the exhaust pipe and cause Sensor 2 to see inaccurate data, often in the form of rapid puffs of outside air/oxygen that mimic a failing catalytic converter.  This is exactly where the pipe on GS300, GS350 and IS250s appears – right next to Sensor 2 “downstream”.  The port for Sensor 2 “downstream” can be seen next to the indicated leak in the first two photos.

Lexus has updated the y-pipe assembly to address this concern, changing the design of the heat shields and pipe to prevent the pipe having this same issue again.  We strongly encourage guests install the update part vs. patching the exhaust, as the problem reoccurs readily on the patched pipes.  We also strongly encourage guests to fix the issue as soon as the exhaust gets louder than normal – when the pipe breaks off entirely the vehicle is extremely loud.

As Minneapolis, Minnesota’s premier independent Toyota and Lexus specialist (and operating in the rust belt), we see this issue often and possess the expertise and experience needed to correctly diagnose this check engine light concern correctly the first time.  If you have a loud GS300, GS350 or IS250 or a check engine light on, don’t hesitate to give us a ring at (952)426-4798 to schedule an appointment today.